I wish I paid attention to even half of what Dad did at home. He’s is the ultimate do-it-yourself guy who knows his way around every tool, gadget, and household repair imaginable. Panicky calls to plumbers and electricians would be far fewer, home maintenance bills far smaller, if only I watched him more closely. 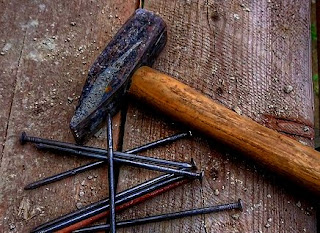 A welder and lifelong construction worker, my Dad’s most important project was his home. I’m one of those privileged kids who lived in houses I helped build with my Dad (using “helped” very loosely).

We now revisit those early days as Dad and I rebuild the deck behind my rural Southern Oregon home. Retired for several years, he’s now more accustomed to sitting in a recliner than a backhoe, but you wouldn’t know it from watching him with hammer in hand and a well-worn tool belt hanging from his too-slim hips. Every board, every beam, every screw and nail all submit to his command.

With Dad in his seventies and me in my fifties, the passage of time hasn’t kept us from falling into our well-rehearsed roles. He is still architect, engineer, contractor, crew chief, and primary construction worker, and I am still the chief nail holder and tape measure guy, and the Dad-can-I-get-you-another-glass-of-iced-tea guy.

The deck slowly takes shape in the hot sun, reddish boards lining up side by side in an elegantly simple pattern, waiting to be trod upon, rained and snowed on. Wasps and mosquitoes keep us company along with Arrow, our panting Border collie, who considers any motionless tool her chew toy.

Sweat and dust sting our eyes as the sun saunters across the sky. The only relief is the occasional air-conditioned drive to the Home Depot for more deck screws, for which I happily volunteer. Despite the sun, aging knees, and half-dead gnats glued to glistening skin, for summer activities nothing compares to a father-son building project.

As the sun sets and the quails grow silent, I sense the presence of two others – a much younger father with his ten-year-old son faithfully holding a flashlight and a coffee can half-filled with nails. On those muggy summer nights that kid was spellbound as his father turned lumber and nails into an eagerly awaited extension to their family home.

The neighbor’s aging German shepherd kept us company those long evenings, dutifully watching for nighttime critters. School was out, the crickets sang, bats fluttered about the street lamp waiting for the moths.

With my younger sister tucked into bed, Mom routinely peered through the screen door, reminding us of the time. But Dad and I didn’t pay much mind. It was summertime and we had dreams to build. A couple more boards, some more nails, and we’d be ready to come inside about the time he finished his lukewarm beer. And the next morning we’d start all over again.

That was a lifetime ago and Dad doesn’t stay up late anymore. Neither do I. Now we gladly go back in the house for iced tea, an evening snack, and the Jeopardy show semifinals, too tired to work any longer this evening.

But that’s okay. Because after Dad finally retreats to the guest room, and I go about the house turning off the lights, I peek out the back window at the unfinished deck and I believe I saw the night crew—a young father and his eager son, quietly gathering our tools, preparing to pick up right where we left off for the night.

I stand before the brambles, watching the wooden plank crash down like a fallen tree. As it leans into the thorny vines, I pump my leg up and down on the bottom of the board, forcing it further to the ground.

I hear the rabbits scamper deep into the thicket, away from the thrashing. 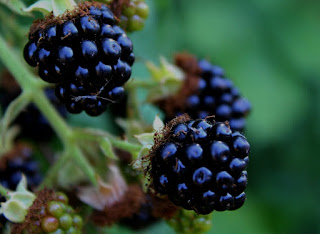 Though the sinewy vines resist, I create a path deep within where only the rabbits go. Black canvas hightops step with confidence down the board, through a corridor of thorns.

The twilight breeze has yet to seep below the brambles, so as I pick swollen berries the sultry air of summer escapes the thicket to warm my face.

The first berries never hit the bucket. That’s the rule.

Late August blackberries want to be picked. A touch of the finger, they roll into my hand.

The bees wonder why I’m here.

Above the wall of vines I see the bats come out to play.

Just me and the bees. The skittish rabbits will wait until I am gone. When they return, the berries will already be hiding beneath a blanket of dough.