From: The Doll-Man
A historical novel about a grieving father and son, and the cost of doing the right thing.

With heart racing, fingers twitching, and his eyes fixed upon the farmhouse within the crosshairs, Chuck Miller and two other soldiers waited in the snowy brush, several yards from the target. A pointman on the hill behind the building signaled the all clear. 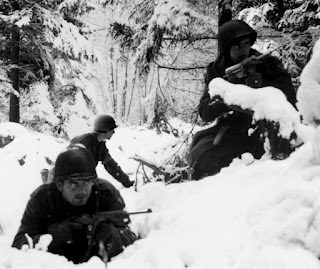 Sergeant Miller’s crouching knees shouted in pain. In the freezing cold of eastern Belgium, the sweat still stung his eyes. If army intelligence was correct, three or four German officers were holed up in this remote farmhouse as the Allies relentlessly pounded crumbling Nazi forces with their iron fists.

“Sarge,” another private said, nudging him. The lookout on the hillside signaled again.

Miller swallowed hard, took a slow deep breath, and crept through the darkness toward the ramshackle house, its light flickering from the windows. He signaled for a stop behind the woodpile just six yards from the front door. One soldier peered between chunks of stacked wood, nodded at the sergeant, and held up two fingers.

The sergeant looked up to the sky, the moon barely visible through murky clouds. With his feet numb and lungs stinging in frigid air, he reached for his grenade. He took another long look between stacked chunks of firewood, his mustache more caked in ice with every steamy breath. He felt like an old man in a young man’s war, and he didn’t know which would end first—this hellish war, or his weakening sanity. He never missed his old life in the butcher shop more than he did this moment. He’d trade his rifle in for a meat cleaver any day, and he prayed that day would be soon.

Miller shot back an angry glare—then pulled the ring.

In one elegantly simple move, he rose to his feet and lobbed the grenade, watching it silently soar over the woodpile, across the yard and scattered tools, gracefully floating above the earth, sailing toward the window. It clipped the overhanging roof and deflected downward through the dingy glass. Shadows inside moved a split second before the crashing of crystal. Then, a fiery blast, dust and snow exploding in all directions from the house.

The three soldiers burst through the door, firing countless rounds about the room, their rifle muzzles flashing through smoke and dust. Then silence.

The sergeant stepped over a motionless man in civilian clothes, past the fireplace, and then stared at the overturned table in the corner. He slowly pulled his Thompson against his shoulder, his finger on the trigger. The others lifted their Carbines. There was a scraping behind the table.

“Fire,” Miller yelled, clamping the trigger down like a vice, bullets spraying side to side, chewing the table to splinters.

Then once again, silence.

The lookout came panting through the door behind them. “I got one running out the back, Sarge. No sign of any others.”

Sergeant Miller crept toward the pile of wood that was once a dining table and chairs. Coughing in the dust, he kicked at the rubble of bloodstained oak. He dropped his gun. His jaw fell open, his eyes grew wide, and he fell to his knees. Frantically pushing away chunks of wood, he grabbed a shoe and pulled someone from the rubble . . .