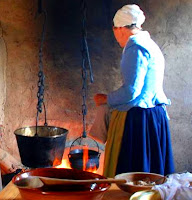 Pilgrims ate a lot of meat, according to Kathleen Wall, the "Colonial Foodways Culinarian" at Plimoth Plantation living history museum in Plymouth, Massachusetts. Her interview for the Boston Globe reveals the traditional cooking method in the 1600s, what kinds of food were most plentiful for them, how it tasted, and why visitors to the plantation are NOT allowed to sample what is created in front of them (hint: modern government regulations). And guess what their favorite beverage was? (Hint: not water.)

My wife and I had the privilege of having a traditional Pilgrim-style Thanksgiving dinner at Plimoth Plantation a few years ago. We usually think about turkey (which they served), but there is no record of turkey for that harvest celebration feast they had in 1621. There was much venison (supplied by chief Massasoit and his men), corn and an abundant supply of some kinds of bird (you can assume turkey was among them if you wish).

The entertainment was wonderful. Several of the costumed "Pilgrims" sang traditional English songs to us, and sat down to talk of their lives and goals as English setters in the early 1600s. They spoke of religion, politics, food, their relationship with the Indians. The food was great, and we ate very well. If you ever take advantage of their Thanksgiving meal (and I hope you do), you can expect pumpkin ("pompion"), but not pumpkin pie. But the Old English cheesecake was a very satisfying dessert! More about "Pilgrim foods" and recipes HERE.