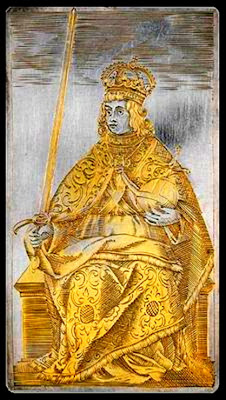 A full deck of 400-year-old playing cards (dating back to the time of the Mayflower Pilgrims) has been discovered.

The Pilgrims would have never used playing cards. Such activity would be too closely associated with gambling and fortune-telling. It is interesting, however, to see cards that existed in the days of the Pilgrims, giving us just another peek into the Medieval European world from which they came.

These particular cards are fascinating in that they also give us a glimpse into the world of European royals – people so wealthy they could commission a pack of playing cards painted with real silver and gold -- the very kind of thing that would be so appalling to the Pilgrims who had disdain for pomposity (not that they couldn't be guilty of it themselves).

Here you will find more regarding the history of playing cards in medieval England. What is interesting here is how they depict medieval royals. It would be interesting to compare the clothing from the cards with paintings from the period.